Robotics Smart Machines Tracks & Treads. Construct 8 different robots with this STEM experiment kit by Thames & Cosmos. 197 Pieces and 8 different projects, comes with a 60 page manual, have fun and learn about robotics with this science kit.

Robotics is a vast, thrilling, and sometimes overwhelming interdisciplinary field involving physics, engineering, and computer science. This kit gives kids a simple, fun, and customizable introduction to robotics that lets them build eight motorized machines controlled by programs and an ultrasound sensor. The models all make use of themselves and other objects around. Kids code programming app on a tablet or smartphone, which connects to the robot models via a wireless Bluetooth connection.

The ultrasonic sensor works on the same princil as sonar. It sends out sound waves, which bounce off objects. The sensointurprets the echoes returning to it, and from this detects objects in the path of the sensor. Using the app interface, you can program the robots you build to behave based on the feedback coming from the ultrasound sensor.

Build a robot with two large continuous tracks that drives around and avoids obstacles in its path. Set up an obstacle course and watch the long-necked scout robot use its ultrasonic sensor to navigate around the obstacles. The attentive tracker bot model detects your hand, moves toward it, and follows it around. Construct models of real-world smart machines, like a conveyor belt robot that carries small objects along its to another level. A cool tundra explorer model moves through an obstacle course and can even drive over small obstacles in its path with unique tank tread design. You can also assemble other fun robots including a dozer bot with a bulldozer attachment on its front end and a fire rescue robot that drives its ladder up close to other objects. After learning how the technology works, you can build and programmer own robots using the kit’s 197 building pieces.

A full-color, 60-page step-=by-step illustrated manual helps kids assemble all of the models and teaches them about robotics in the real world. Digital assembly instructions are also available in a separate app for Android or iOS.

In the programming app, the visual programming language allows you to command the robots’ motors to move at different times, different power levels, in different directions, and in response to the data from the sensor. Requires a tablet or smartphone running iOS (iPhone 4s or later, iPad 3 or later, iPod 5 or later) or Android (Android 4.3 or later on a device with Bluetooth 4.0 support). 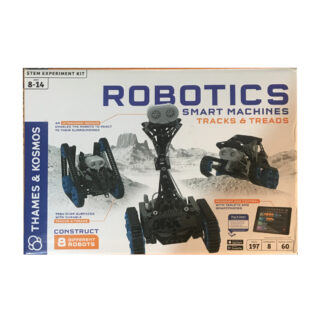